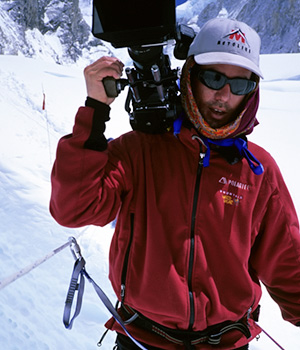 Since 1992, Jim Surette’s career as a DP and camera operator has led him to shoot television programs for all the major networks, as well as feature documentaries, and commercials. He has worked with a diverse portfolio of clients that includes National Geographic, Warren Miller Entertainment, Discovery, MTV, The North Face, Patagonia, Eddie Bauer, Peter Jennings Productions and others.

In addition to mainstream productions, Jim often works in the adventure and action sports industries. From Mount Everest to Antarctica, Jim has operated cameras in the world’s most extreme environments, keeping up with world-class athletes to get his shot. Jim’s experience as an expert climber and skier allows him an inside perspective on the places and personalities he captures on film. Jim’s mountain skills enable him to single-handedly rig his own shots without the need of a large crew. He has worked as a camera operator for Discovery Channel’s hit show, The Deadliest Catch; National Geographic Explorer’s Surviving Everest; NBC’s Great Trango: A Mile High in Pakistan; and Matchstick Production’s Claim, filming extreme skiing in the Alps. In 2010, Jim partnered with pro-skier Chris Davenport to produce the independent adventure film Australis: An Antarctic Ski Odyssey.

Ultimately, a good story is the most important ingredient in entertainment. Jim’s talents lie in capturing scenes on camera while letting the action play out naturally. He is an experienced producer-shooter who knows how to get all of the shots that are needed to develop, follow, and complete a story line.

Jim is a native of the Mount Washington Valley, New Hampshire, where he learned an appreciation for the mountains at an early age. Jim was on skis by the age of 4, and climbing waterfall ice by 14. While still a teenager, Jim established what was then the hardest technical rock climb in New England, with his historic first-ascent of Cathedral Ledge’s Liquid Sky. His exploits on rock have been documented in feature articles in Climbing and Rock and Ice magazines, as well as the films Master’s of Stone II and Uncommon Ground. He has ventured to the top of remote peaks in Kyrgyzstan, Pakistan, Baffin Island, Patagonia and Peru, and pioneered new, hard routes throughout New England and the Rocky Mountains.

The footage we see in Steep is positively breathtaking… Some of the climbing sequences that are in the early parts of the film were shot by Jim Surette, who is a consummate climber. He would climb into places (where) you couldn’t really get a bigger camera and felt so confident in his climbing abilities that he was able to get some really wonderful footage, particularly of Doug Coombs.
– Mark Obenhaus, director of Steep, quoted in the Dec. 12, 2007 issue of The Hollywood Reporter.

Your scene on the Epic Couloir is the climax of the film. It’s amazing what you were able to capture up there.
– Roman Gackowski, producer of Shelter From The Storm, The North Face and Rush HD’s film about women skiers in the arctic.

Download a PDF of Jim Surette’s biography and credits.