With over 20 years in the business, we’ve been fortunate to work on a variety films, television shows, and commercials. View our Credits page for a complete listing, and check out some of our featured productions below.

In 2009 and 2010 Granite Films teamed up with Davenport Mountainsports to produce an independent adventure-sports documentary about ski mountaineering in Antarctica. Australis follows pro-skiers Andrea Binning, Stian Hagen, and Chris Davenport as they sail from Tierra del Fuego to the Antarctic Peninsula to seek out the ski lines of their dreams. During their journey, the team discovered a new understanding of the beauty of ski mountaineering and the depths of human connection to nature.

In February 2010, our friend Steve House called to tell us he was thinking about soloing Repentance and Remission, two of New England’s most classic, difficult ice climbs. We showed up the next morning to capture this historic enchainment, not knowing what we’d witness. The result is a haunting short film that explores the human psyche and gripping action of free-solo climbing.

A commercial project produced for The North Face, Solar Flare follows climbing luminaries Peter Croft and Conrad Anker as they climb a new route on the Incredible Hulk in the High Sierra. This film captures the physical drama of climbing as well as the value of partnership and the mountain experience. “When it all comes together it seems like magic; it seems like the day is made for you,” Peter Croft.

High-angle terrain, remote location, small crew? No problem. In February 2011 we traveled to the Wadi Rum desert in the southern Arabian Peninsula to film rock climbers Caroline George and Sarah Garlick. We traveled and worked as a team of four: the two athletes, one rigger, and one camera/sound operator. When you’re hanging off a 1000+ foot cliff of soft sandstone only a few miles from the Saudi Arabian border, operating as a small, efficient team is key. This is a commercial project for Eddie Bauer’s First Ascent line of technical apparel.

In February 2011 we traveled to the coast of southern Thailand to film rock climber Caroline George. This is a commercial project for Eddie Bauer’s First Ascent line of technical apparel.

We love working on local projects, especially when they bring fun productions like Speed Chasers to New Hampshire. Speed Chasers is a short video project we worked on for Aura 360/Red Bull, following Rally America National Champion Travis Pastrana as he attempts (and succeeds!) to set the fastest ever recorded speed on the Mount Washington Auto Road.

Jim Surette’s cinematic long-lens shots and tension-oriented camp scenes are featured in this stunningly beautiful and high-drama mountain film. Winner of dozens of festival awards, this documentary follows three of the world’s greatest ski mountaineers in their attempt to realize the longest ski descent of the world on Alaska’s Mount St. Elias.

This two-hour documentary broadcast on Discovery Channel was so successful, it launched the popular series Surviving the Cut, which is now in its second season. We are honored to work as part of Bobby Williams’ tight-knit unit. Two Weeks in Hell and Surviving the Cut are created by a small, talented crew that is able to gain high-level access and capture never-before-seen footage of the U.S. military. This is real reality TV at its best.

Steep is one of our favorite projects we’ve worked on. Originally hired as the operator of the CableCam, which was rigged in a wild, improbable location high in the mountains of Bella Coola, British Columbia, Jim Surette had no problem stepping in when they needed an on-slope climbing and skiing cameraman as well. Climbing steep couloirs with Doug Coombs and heli-skiing with Shane McConkey and Seth Morrison, filming the whole time… just another day in the office.

Jim Surette filmed skiers Chris Davenport and Stian Hagen as they climbed and skied the four iconic peaks of the Alps: the Matterhorn, Eiger, Monte Rosa, and Mont Blanc. Jim was helicoptered to the top of the Eiger to film summit close-ups, and then lowered via long-lined from the heli onto the face of the Matterhorn to shoot on-slope. 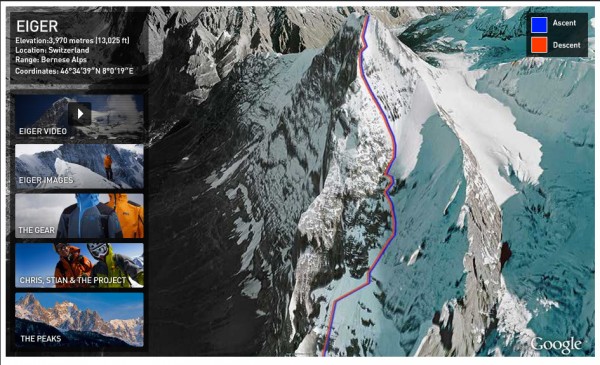 Jim Surette and his long-time collaborator and mentor Michael Graber filmed the start, finish, and field action in this feature documentary film by Dana Brown. Surette and Graber were blown away by the mayhem of the Baja 1000 off-road race.

This was a special project for us because we were able to work with one of our oldest and dearest friends, Hugh Herr. Mountains without Barriers was filmed during No Barriers Dolomiti 2005, a festival that creates opportunities for people with disabilities to learn new skills and to exchange ideas and dreams with those who create the technologies to assist them. To showcase the spirit of the festival, MIT biophysicist Hugh Herr, who is a double amputee, climbs in the Dolomites with Eric Weihenmayer and Andy Holzer, two rock climbers and adventurers who are also blind.

Jim Surette filmed climbers Peter Hillary, Jamling Norgay, and Brent Bishop on Mt. Everest for National Geographic in 2002, the footage of which has been used in several National Geographic productions. Surette and Graber made several attempts on the mountain with the climbing team, reaching a high point at the South Col (26,000 feet).

In 1999, live internet dispatches and video footage of remote climbing expeditions was anything but the norm. Jim Surette and Michael Graber worked at the cutting edge of this technology in the mountains of Pakistan, filming climbers Alex Lowe, Jared Ogden, and Mark Synnott as they established one of the longest rock climbs in the world on Great Trango Tower.

One of our earliest projects was filming Lynn Hill free-climbing The Nose on El Capitan in Yosemite National Park. Lynn is an extraordinary athlete and it was an honor to witness and document her historic achievement.